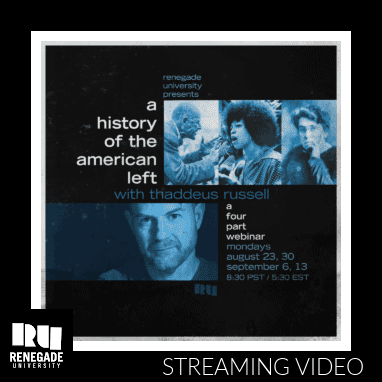 A History of the American Left

This course examines the history of the political and intellectual movement that is now at the heights of American culture.

Though the great majority of Americans do not identify as radical or left-wing, what is called “the left” has taken commanding positions in many parts of American society.

Since the 1930s, socialists, communists, and social democrats have controlled many of the major labor unions in the United States, and with that power have continued to exert influence over American electoral politics. Since the 1960s, the left has dominated academia, and few college graduates have not been exposed to the ideas of Marxism, radical feminism, or critical race theory.

In recent years, for the first time, the previously liberal mainstream media has propounded political ideas that previously were voiced only by a small number of radical intellectuals. A rising faction of the Democratic Party openly embraces or is sympathetic to some version of socialism, and virtually every self-identified progressive speaks of left-wing concepts like systemic racism and patriarchy and calls for a radical redistribution of wealth and power.

We begin the course with an analysis of the intellectual origins of the modern American left, including Rousseau and the French revolution, Marx and “scientific socialism,” Eugene Debs and Christian socialism, “2nd-wave” radical feminism, and the anti-racism of the abolitionist, civil rights, and Black Lives Matter movements.

We then focus on the major left-wing movements in the history of the United States:

Thaddeus Russell is the founder of Renegade University and the author of A Renegade History of the United States. He has taught history and cultural studies at Columbia University, Barnard College, Eugene Lang College, the New School for Social Research, Occidental College, and Willamette University. Born and raised in Berkeley, California, Russell graduated from Antioch College and received a Ph.D. in history from Columbia University.
Twitter
Facebook-f
Youtube
Instagram