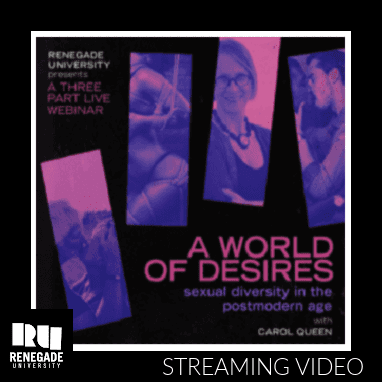 A World of Desires: Sexual Diversity in the Postmodern Age

A World of Desires: Sexual Diversity in the Postmodern Age

Each session will run between 2 and 2.5 hours

Taught by renowned sexologist Carol Queen, this course will examine  sexualities  that are outside the traditional heterosexual binary and transgress norms of acceptable sexual desires.. A failure to recognize and accept  diverse identities has caused considerable cultural—and personal—pain and trouble. “A World of Desires”  will teach a healthy sex-positivity beyond unnecessary binary norms. Insistence on a “normal” sexuality simply does not fit the conditions and constructions of the world as it exists today.

Since the publication of Carol’s  book exploring a spectrum of postmodern sexual identities more than  twenty years ago, nonbinary identities have taken a far more central role in the way we think about both sexuality and gender. From pronouns to pansexuals, refusing a binary identity has made sense to ever more humans and has left others trying to keep up with this element of cultural change.

The ability to think outside the binary helps us challenge assumptions that have long been cultural building blocks, so it’s no surprise that there is pushback. In this course, we will unpack the reasons behind the pushback. We will explore how we can live in a world of diversity in sexual and gender identity and expression, and, by extension, a world of many other nondual and nonbinary experiences.

Carol has worked as the Staff Sexologist and Chief Cultural Officer at the San Francisco sex shop Good Vibrations since 1990 and is the founding director of the Center for Sex & Culture. She’s the author of Exhibitionism for the Shy, The Leather Daddy and the Femme, and the collection Real Live Nude Girl: Chronicles of Sex-Positive Culture. Her co-edited book PoMoSexuals won the 1998 Lambda Literary Award. Queen has also appeared in many documentaries on human sexuality and is a past guest on Unregistered with Thaddeus Russell. Queen holds a PhD in Human Sexuality from the Institute for Advanced Study of Human Sexuality.

Carol Queen holds a PhD in Sexology from the Institute for Advanced Study of Human Sexuality. She is the Staff Sexologist and Historian at Good Vibrations, the women-owned, worker-owned sex toy and book emporium. She also curates the company’s Antique Vibrator Museum. Carol co-founded and directed the Center for Sex and Culture, which provided educational courses, cultural events, and a library and media archive for the sex-positive community in the San Francisco Bay Area from the early 1990s to 2019. She is the author of The Sex and Pleasure Book: Good Vibrations Guide to Great Sex for Everyone, PoMoSexuals: Challenging Assumptions About Gender and Sexuality, and Real Live Nude Girl: Chronicles of Sex-Positive Culture.
Twitter Facebook-f Youtube Instagram