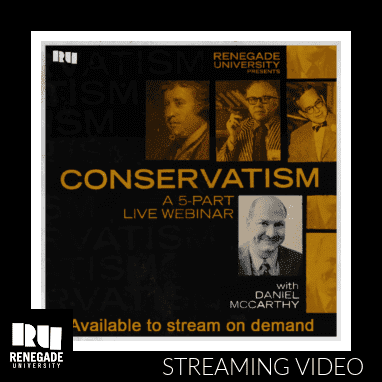 Conservatism is a much-contested idea, and in some quarters a much-reviled one. Is conservatism just another word for fascism, as many critics of Donald Trump and the latter-day Republican Party believe? Did conservatism betray its roots by turning illiberal? Or is conservatism a distinct tendency in political thought and action that is neither fascist nor liberal, but a powerful critique of both?

This course makes the case for conservatism as understood by its own best thinkers and through the themes characteristic of their thought. Traditionalists warn of the limits of human reason and the dangers of applying rationalism to politics and society. Conservative individualists argue that the ethos of aristocracy, not democracy or equality, is essential to liberty. In the 20th century, new forms of right-wing Machiavellian and neoconservative thought came to prominence, with the former applying a muscle-minded power analysis to the state, the world, and what James Burnham called “the Managerial Revolution,” while the latter tried to make the right both more politically centrist and more hawkish in foreign policy. Challenging the neoconservative influence were the “paleoconservatives” who supported Pat Buchanan’s presidential campaigns in the 1990s and whose intellectual flagship was Chronicles magazine. They extended the legacy of populist and Southern strains of political thought and in many ways prefigured the rise of Donald Trump.

Today the right continues to mutate, as parts of the “Straussian” school of thought that had seemed aligned with neoconservatives from the Reagan era to the George W. Bush administration now become radical critics of the regime and allies of the latter-day heirs to Buchanan and the “rad trads” who question all the myths of the Enlightenment.

This five-lecture course will survey all these movements through touchstone thinkers such as Russell Kirk, Edmund Burke, Joseph de Maistre, Albert Jay Nock, Frank Meyer, James Burnham, Irving Kristol, Samuel T. Francis, Leo Strauss, and Michael Anton. Each lecture also presents a fundamental theme—the importance of human irrationality; the need for aristocracy; the basis of modern politics in force and fraud; the virtue of the “deplorables”; and the ideals of the right beyond the narrow dogmas of Enlightenment liberalism. Radicals, progressives, and liberals, no less than conservatives, libertarians, and the simply curious will profit from this intense exploration of this neglected yet powerful body of thought.

Daniel McCarthy is the editor of Modern Age: A Conservative Review, and Editor-at-Large of The American Conservative. His writing has appeared in many mainstream, conservative, and libertarian publications. Dan is director of the Robert Novak Journalism Fellowship Program at the Fund for American Studies. Outside of journalism he has worked as internet communications coordinator for the Ron Paul 2008 presidential campaign and as senior editor of ISI Books. He is a graduate of Washington University in St. Louis, where he studied classics.
Twitter Facebook-f Youtube Instagram