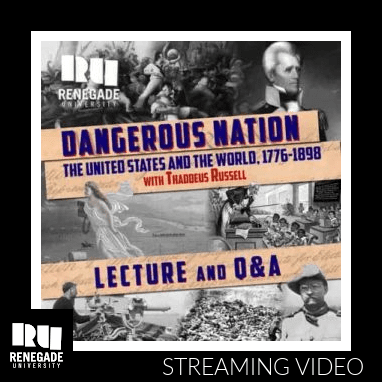 An argument that globalist, imperialist ideas were embedded in America’s founding philosophy.

sThe United States of America became a globalist empire not with the Spanish-American War in 1898, as most textbooks tell us, but with its founding. The Declaration of Independence asserted that “the People” possessed both a right and a “duty” to overthrow oppressive governments and to “provide New guards for their future security.” This idea famously justified the American War of Independence, but it was also interpreted by subsequent political leaders of the United States as an injunction to forever expand what Thomas Jefferson called the “empire of liberty.”

Through the great foreign and “civil” wars of the 19th century and the conquest of overseas territories at the dawn of “the American century,” the United States was conceived and governed not just as an exceptional “city upon a hill” but as a global, revolutionary force whose mission was to remake the world in its own image.

This course presents an argument that globalist, imperialist ideas were embedded in America’s founding philosophy and that they were carried out in all the military endeavors of the U.S. in the 19th century, from Jefferson’s campaign against the “Mohammedan” pirates of the Mediterranean to Jackson’s crusade to “civilize” the West and Lincoln’s conquest and “reconstruction” of the South.