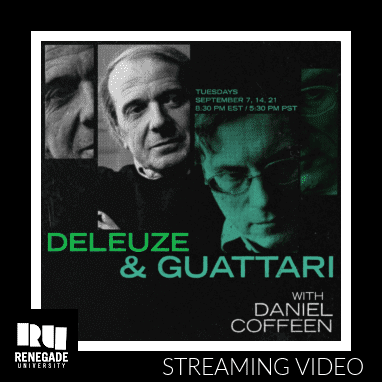 In his introduction to Deleuze & Guattari’s first book, “Anti-Oedipus,” Michel Foucault suggests that the title could have been “An Introduction to the Non-Fascist Life.” Indeed, for Deleuze, and Deleuze & Guattari (this course will discuss the difference), attempts to create a ground that doesn’t move — “big” philosophical questions, identity, reason, representation — erase the difference of things, the thisness (haecceity) of me, you, this or that idea, blade of grass, mosquito. This will to ground life restricts and controls the tumultuous and relentless play of life—it’s a kind of masochism: life hating itself.

So throughout their writing, Deleuze & Guattari create concepts, figures, and operations that allow us not just to think differently but to think difference itself as it moves through the world, ever becoming, morphing, dissolving. The result is an admittedly strange world—they call it science fiction—in which everything is in motion with everything else, commingling (and not), as geological, vegetal, cosmic, and animal forces flow this way and that as bodies and forms shift and flow and change. The result is a radical reorganizing of everything — of philosophy, knowledge, personhood, logic, politics, freedom. This can make reading them difficult. After all, they never give you a map or overview of their world as no such thing exists: there is no outside the great teem of life.

In this course, we’ll talk about how to read them (and why they write the way they write) and the worlds they create. And then we’ll dig into some of their beautiful concepts, figures, and operations such as difference in itself (haecceity), repetition, the rhizome, becoming-x, a Body without Organs (BwO), schizoanalysis, immanence, assemblages, lines of flight, territorialization (as well as re- and deterritorialization), and others. It’ll be a wild ride, I assure you, as you’ll be nudged to think in ways you’ve never even imagined existed.

We’ll focus on passages from Deleuze’s “Difference & Repetition” as well as Deleuze & Guattari’s “A Thousand Plateaus” and “What is Philosophy?” We may also read a bit of the philosophers who informed so much of D&G such as Nietzsche, Bergson, Spinoza, and Leibniz.

I got my my PhD in Rhetoric from UC Berkeley in 1998 where I spent a lot of time reading and writing about Nietzsche, Deleuze, Kierkegaard, Foucault, Merleau-Ponty as well as the films of Godard, Cassavetes, and David Lynch. I taught adjunct in the department for many years and then a few more years teaching critical theory to MFAs at the SF Art Institute. But displeased with academia, I've been writing independently and doing a series of podcasts. I wrote a nifty little book called Reading the Way of Things: Towards a New Technology of Sense published by Zero Books.
Twitter Facebook-f Youtube Instagram