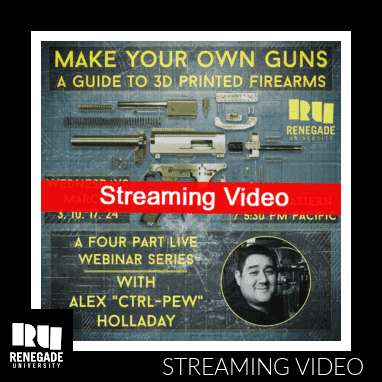 Make Your Own Guns: A Guide to 3D-Printed Firearms

This unprecedented course—a course that no regular university would consider offering—will guide you through the making of your own 3D-printed gun and give you the knowledge to become self-sufficient in providing for your own security.

Since 2013, when Cody Wilson’s Defense Distributed organization released the blueprints for the first 3D-printed gun, countless people across the world—probably numbering in the hundreds of millions—have used cheap 3D printers and blueprints to produce firearms of nearly every type in their homes.

Governments around the world have tried and failed to stop the production of do-it-yourself guns. But technology has made it impossible for governments to thwart the desire of people to provide for their own security. The genie is out of the bottle. 3D-printed guns are the future.

This unprecedented course—a course that no regular university would consider offering—will guide you through the making of your own 3D-printed gun and give you the knowledge to become self-sufficient in providing for your own security.

Led by Alex Holladay—who as “CTRL+Pew” is one of the leading producers of blueprints and instructional videos for 3D-printed firearms —this course will guide you through every step of making your own gun.
The first two sessions will cover the software, hardware, tools and equipment you will need to set up your print and produce safe and effective firearms, as well as the upgrades and repairs to improve your arsenal.

Sessions three and four will be devoted to something that is not allowed to be shown on Youtube—building printed elements into a finished gun. Alex will show you how to build a semiautomatic Glock pistol and the famous AR-15 semiautomatic rifle, and will help students in the course build guns from components they have printed.

Alex “CTRL+Pew” Holladay is one of the leading producers and distributors of blueprints and instructional videos for 3D-printed guns. Since launching his website and Youtube channel in early 2020, his “Getting Started Guide”—the only comprehensive guide for beginners available on the internet—has been downloaded more than 150,000 times.
Twitter Facebook-f Youtube Instagram