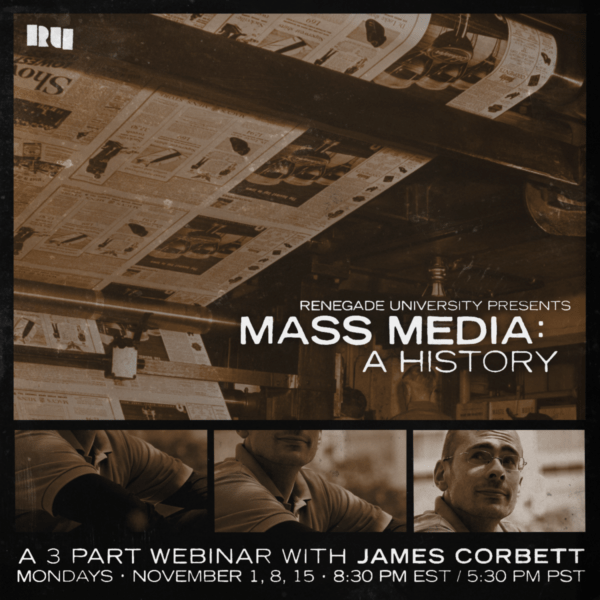 Beginning in the late 19th century and accelerating in the 20th century, a series of technological innovations brought about the age of mass media: national newspapers, radio stations, TV networks, and now websites and social media. These new forms of media have transformed our relation to the world and altered the course of human civilization.

This three-part course explores those changes in their historical context, from the development of mass media technologies to the consolidation of the media oligopoly to the fracturing of narratives that has taken place with the rise of the Internet. Together, we will examine how the mass media and the industry that has grown up around it has been engineered to produce certain effects in the population and where these technologies are directing us in the 21st century.

James Corbett is an award-winning investigative journalist and host of The Corbett Report. James has lectured on geopolitics at the University of Groningen’s Studium Generale, and delivered presentations on open source journalism at The French Institute for Research in Computer Science and Automation’s fOSSa conference, at TedXGroningen and at Ritsumeikan University in Kyoto. He started The Corbett Report website in 2007 as an outlet for independent critical analysis of politics, society, history, and economics. Since then he has written, recorded and edited thousands of hours of audio and video media for the website, including a podcast and several regular online video series. Born and raised in Canada, James now resides in Japan.
Twitter Facebook-f Youtube Instagram