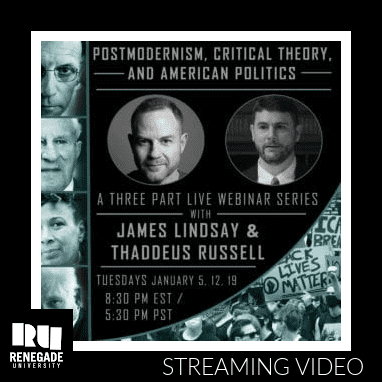 This course is unique among university courses in that it is co-taught by two scholars of critical theory and postmodernism who are on opposite sides of many of these questions. It will not only be a three-week discussion but also a civil, respectful debate involving the instructors and participants.

Are “critical theory” and postmodernism the sources of authoritarian “social justice” and “identity” politics emanating from college campuses? Do the ideas of “critical theorists” like Herbert Marcuse and Kimberlé Crenshaw and postmodernist philosophers like Michel Foucault and Jacques Derrida constitute a threat to political freedom or are they consistent with the ethic of personal liberty? Are these ideas deeply held and well-intentioned beliefs or just “cynical theories” intended to undermine every aspect of society and institute repressive rule?

This course is unique among university courses in that it is co-taught by two scholars of critical theory and postmodernism who are on opposite sides of many of these questions. It will not only be a three-week discussion but also a civil, respectful debate involving the instructors and participants.

By examining the texts associated with the notorious schools of thought, we will all deepen our understanding of ideas that both instructors agree have shaped the discourse in mainstream American media and politics. Participants unfamiliar with the texts will gain knowledge of the major arguments in the most famous works of Marcuse, Crenshaw, Foucault, Derrida and other critical theorists and postmodernist philosophers, and will attain new ways of thinking about the questions they raise:

– Is critical theory or postmodernism a Trojan horse for totalitarianism?
– Is the United States intrinsically oppressive, racist, sexist, and homophobic?
– What is power, who holds it, and where is it?
– Does power operate from the top of a society downward or from the bottom of society upward, or does it move in different directions and originate from multiple sources? – Does truth exist?
– Is there a reality that exists outside and apart from human consciousness?
– Can ethics be objective?
– What purposes have truth claims served?
– What are scientific “facts”?
– Are words violent?
– Does one’s biology determine one’s destiny?
– Were you born a man or a woman or neither?
– Does freedom exist?

BUY CREDITS
James Lindsay is a mathematician and cultural critic who many (including Thaddeus Russell) consider to be the leading scholarly critic of critical theory and postmodernism. He is best known for his involvement in the “grievance studies affair,” in which he and his partners Peter Boghossian and Helen Pluckrose authored deliberately nonsensical articles that were accepted for publication by academic journals, and for co-authoring with Pluckrose the bestselling book Cynical Theories (2020) and founding New Discourses, a media website and educational resource on critical theory and the politics of “social justice.”
Thaddeus Russell is the founder of Renegade University and the author of A Renegade History of the United States. His peer-reviewed American Quarterly article “The Color of Discipline: Civil Rights and Black Sexuality,” is the most downloaded article in the history of the journal. He has taught courses on African-American history at the undergraduate and graduate level at Columbia University, the New School for Social Research, and Occidental College. His course, “Race: The History of an Idea,” is one of the bestselling Video Courses at Renegade University. Thad holds a PhD in history from Columbia University.
Twitter Facebook-f Youtube Instagram