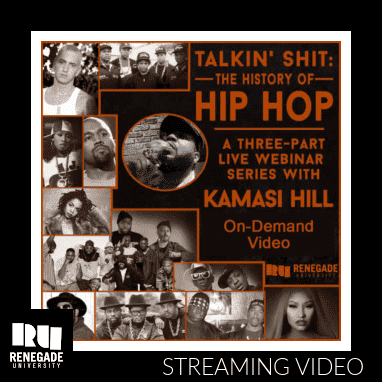 Talkin’ Shit: The History of Hip-Hop

This course examines the origins and rise of one of the most prolific yet misunderstood forms of popular culture in American history.

Talkin’ Shit: The History of Hip-Hop

This course examines the origins and rise of one of the most prolific yet misunderstood forms of popular culture in American history.

Throughout its rise from the streets of the South Bronx to global pre-eminence, hip-hop has consistently challenged the norms of “respectable” society with its relentless critique of authority and hierarchies, volatile discourse, and unabashed celebrations of material culture and the pleasures of the body.

This course will analyze hip-hop as an art form, dig into the content and impact of its artists and songs, explore its impact on society, and examine what it reveals about the culture and world we live in.

Kamasi C. Hill is a historian, theologian, educator, art curator, and filmmaker. Born and raised in Detroit, Michigan, he attended Detroit public schools, graduated from Howard University, and received his PhD in religion from Northwestern University, where he specialized in the history of African-American religion and culture. He lives in Chicago and teaches U.S. and African-American history at Evanston Township High School. He has curated more than 300 pieces of original African and African American art, and work from his collection has been exhibited at the Museum of Science and Industry, DuSable Museum, and the University of Chicago. Kamasi also wrote, produced, and directed the documentary film Born in the Struggle, on the lives of children of black radical activists from the 1960s and 1970s.
Twitter Facebook-f Youtube Instagram