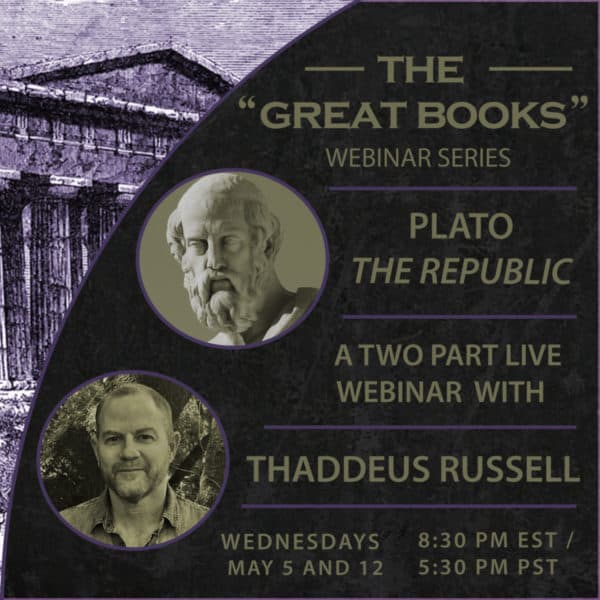 The Great Books: Plato, The Republic

In this course we will do a close reading and analysis of the monumental work of philosophy, Plato’s Republic. You’ll learn Plato’s views on the meaning of justice, the characteristics of a good society, the proper relationship between the individual and the community, the problems with democracy, the function of art, the consequences of greed, the best education for each class of person, the basis of morality, and the very nature of truth.

– Level 1 members get 1 credit with their membership and can purchase a additional credits to enroll in multi-credit courses.
– Level 2 memberships come with 6 credits and
– Level 3 memberships include 10 credits.

No text other than the Bible has been as influential in the history of Western civilization as Plato’s The Republic. Written around 380 BC, The Republic raises and offers answers to all the major questions that still occupy philosophers and political theorists. Readers new to the text are often amazed at how much of their culture they see being created in the series of dialogues between the character of Socrates and his interlocuters. Anyone raised in the West will recognize in the text many of the central precepts of their world.

The Republic addresses the meaning of justice, the characteristics of a good society, the proper relationship between the individual and the community, the problems with democracy, the function of art, the consequences of greed, the best education for each class of person, the basis of morality, and the very nature of truth.

In the webinar we will do a close reading and analysis of this monumental work of philosophy, using the Hackett Classics edition, translated by G.M.S. Grube.

The first so-called “Great Books” course covering the major philosophical texts of Western civilization was Columbia University’s famous year-long “Introduction to Contemporary Civilization” seminar, which was founded in 1919 and became a requirement for all Columbia undergraduate students. Columbia’s great books course was emulated by many other elite universities and became the core curriculum at the St. John’s College campuses in Baltimore and New Mexico and at Deep Springs College in California.

Thaddeus Russell taught “Introduction to Contemporary Civilization” while a graduate student at Columbia and continued to teach many of the texts from the course over the next 25 years.

Similar to Columbia’s course, the texts taught in RU’s Great Books series have been chosen for their historical influence, their enduring intellectual and political importance, and their demonstrated ability to provoke productive discussion. They raise and attempt to answer all the major questions in the history of Western philosophy and political theory.

Thaddeus Russell is the founder of Renegade University and the author of A Renegade History of the United States. He has taught history and cultural studies at Columbia University, Barnard College, Eugene Lang College, the New School for Social Research, Occidental College, and Willamette University. Born and raised in Berkeley, California, Russell graduated from Antioch College and received a Ph.D. in history from Columbia University.