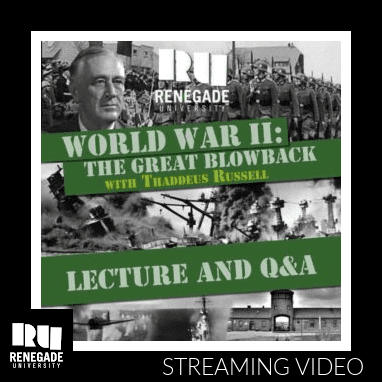 Americans are skeptical of all but one of the foreign wars of the United States. It is widely accepted among both historians and the knowledgeable public that the Spanish-American War, World War I, the Korean War, the Vietnam War, and the Afghanistan and Iraq wars were either colossal “mistakes” or acts of imperialist aggression.

In the United States, it is still impossible to call into question the virtue of this country’s participation in the global war of 1939 to 1945 without being dismissed or castigated as a Nazi sympathizer, Holocaust denier, conspiracy theorist, or crank. And yet over the last two decades, academic historians in Europe have begun to assemble recently discovered evidence into a new narrative in which the policies of the United States during Franklin Roosevelt’s presidency are a principal cause not only of the military conflicts in Asia and Europe that killed more than 60 million people but also of the deaths of six million Jews inside the Third Reich.

Americans and even American historians of World War II seem unaware of the mounting evidence produced by scholars largely outside this country that Imperial Japan and Nazi Germany contained fatal internal contradictions that made their self-destruction imminent and obviated the need for foreign military intervention. It is now a common interpretation among historians working in European universities that the diplomatic, economic, and military interventions of the United States made what were regional wars of limited scope into the first truly global war, guaranteed the realization of the Holocaust, and were principally responsible for producing the greatest catastrophe in human history.

In this 3.5-hour lecture we will do what very few American historians of World War II know or dare to do. We will examine the emergent, revisionist history and determine whether it is now plausible to argue that America’s “good war” was actually America’s greatest blowback.